Hi there! So we are on day 3 of this cleanse.  So first I want to tell you what happened the night of day 1.  I woke up in the middle of the night totally weak.  I couldn’t make a fist, raise my head I mean I felt awful. My back was aching in a weird weak way. I can’t really explain it.  I went back to sleep an when I awoke in the morning I still felt weak but I slowly started to feel better.  Hubby felt fine.  Great for him.

So day 2 we had 2 green smoothies each and 2 servings of brown rice and veggies for the day.  We had our appointment and we celebrated that we managed to not go to the restaurant on the inter coastal! Phew.  But…….

After we finally put our 10& 1/2 month old to sleep we decided to have a few cocktails! He had vodka red bull, I had red wine.  So relaxing.  Lil baby just won’t go to sleep. Jeesh!! It takes everything out of both of us to get him to close his eyes so those drinks were like well deserved! Lol!

And when I woke up this morning I felt great!

Hmmm! I don’t know! Whatever!!

Hi there!  So today ends the first day of the green smoothie cleanse.  It was pretty smooth sailing for both myself and hubby.  We had a green smoothie for breakfast.  Because we didn’t really prepare for it the night before I ended up just using what was in our fridge.  I used:

an apple, an orange, a few chunks of pineapple and a few frozen strawberries, water and I had to use romaine lettuce.

It took us some time to get to the grocery store so it was about 4 hours later before we were able to have our 2nd smoothie which was a banana, a few strawberries, a few chunks of pineapple, spinach and water.

This one was much better.  I had a little bit of a headache during the day but it didn’t last too long.

We were a little hungry around 3 pm so we had a few chunks of pineapple.

I’ve done only green smoothies before for 10 days, no solid food, just smoothies.  Its went well but I was pretty over it because you just miss eating food.  Everything was just sweet all the time.  You need a break from it so that’s why I added the brown rice and veggies.

I also added branch chain amino acid capsules.  This will help us to not lose any muscle during this week.

It would be nice to have a glass of red wine right now but whatever.  I’ll forgo it.

Day 1 was pretty uneventful but I’ll report back in a few days.  Tomorrow will be a little harder because we have an appointment and whenever we are in that area we love to go to this one restaurant that is on the inter coastal.  So we’ll see.

Our lunch and dinner was brown rice and veggies.

I used mushrooms, onions, cauliflower, broccoli, etc.  I also used one scotch bonnet pepper.  It’s super duper firey hot.  You cannot touch it with your fingers.  I made that mistake one time.  It was hours later, I mean I had washed my hands moisturized…it had been a few hours.  Then I made the mistake of rubbing my eye.  Yikes!!!!!!!  Insane hot.

But anyway with the pepper and the salt, it was very tasty.  hubby loved it too.

Today is the last day until 7 days later.  Hubby and I are going on a green smoothie cleanse.   We just finished 2 small bags of smart food popcorn! Yum! We love it!  Stay tuned until tomorrow!  Day 1! 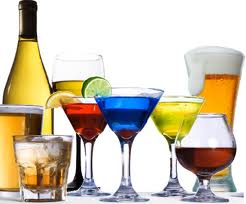 I hate to begrudge someone a cocktail but for weight loss purposes it just isn’t optimal.  Alcohol carries 7 calories per gram.  That’s a lot higher than 4 calories per gram that’s in a carbohydrate and protein.  Furthermore, unlike the carbohydrate and protein the 7 grams that’s in each gram of alcohol are empty calories; it contains no nutrition.

When we consume alcohol our body turns it into acetate to burn off as energy however while the body is busy burning acetate for fuel it puts all the carbs, proteins and fats that we’ve ingested on the back burner leaving it to store in our body as fat and the more alcohol ingested the longer it takes to metabolize.  The body can only process about .5 to 1 oz of alcohol per hour.  Plus if you drink high calorie drinks like margaritas or sugary drinks like mojitos, bailey’s and alcohol with juice etc you are getting all of the empty sugar and carbs as well.

Just drink in moderation and try to stick to spirits with seltzers and squeeze lemon/lime or drink red wine.  It’s considered heart healthy when used in moderation.  Red wine has resveratrol and antioxidants that may help prevent heart disease by increasing levels of good cholesterol and protecting against artery damage.